On May 28, 1586, Sir Francis Drake – a privateer for Queen Elizabeth I of England – sailed a fleet of twenty-three into the waters off St. Augustine and spent the next three days sacking the Spanish colonial capital. What he could not steal, Drake burned to the ground. Follow this exciting re-enactment of Drake’s Raid by the men and women of the Historic Florida Militia as English corsairs engage Spanish soldados and militia as they charge from the City Gates and Santo Domingo Redoubts down St. George Street to the Governor’s House at the Plaza. Skillful swordsmanship and historic black powder weapons will be on display as we relive one of the city’s deadliest moments in our history. This map, which was drawn in 1589 to depict Drake’s Raid on St. Augustine, became the oldest map in history to display what is now a city in the United States! 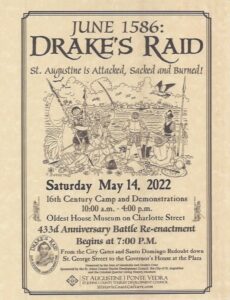